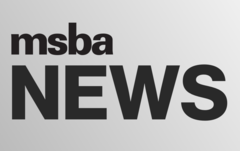 TO:           School Board Chairs, Superintendents of Schools, and MSBA Board of Directors

There are restrictions that apply to the election of MSBA Board Members and Officers: a) only one member on an active regular member School Board is eligible to serve on the MSBA Board of Directors; b) no more than three officers and/or directors can be members of School Boards in any one MSBA region; and c) to be elected as an officer the individual must have completed at least one year on the MSBA Executive Board by October 23 *.

After the July 7 deadline, in order to nominate a candidate, two MSBA active member boards must file the Officer Nomination form (click link below) along with a copy of the minutes of the board meetings indicating a formal vote in support of that nominee. This statement of endorsement must be received at the MSMA office at least 30 days prior to the Delegate Assembly—no later than September 23.

* Note:  Individuals serving on Associate Member Boards, including CTE Regions, are ineligible to serve on the MSBA Board of Directors.